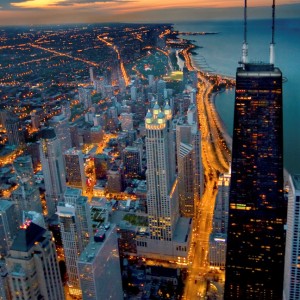 The 360 Chicago observatory is the go-to destination for anyone who wants to experience the best views the city has to offer. This is an architectural wonder and played a large part in the development of what we know as the modern day Chicago. This building is called 360 Chicago for its breathtaking 360 degree view of Chicago from the 94th floor observatory. This building was originally known as the John Hancock Observatory in 1969 when it was officially opened and the name was only recently changed to 360 Chicago. This building is the fourth largest building in Chicago and the view is spectacular. Even better, there is now a thrilling new feature called TILT. This allows a section of the floor to tilt out so you can get the best view possible of this amazing city. Give your travel group the fantastic chance to see the city as you never have before and may never again. Panorama touch screens offer 360 degree views of the Chicago Skyline as well as information on the city’s history, culture, architecture, and natural scenery. This availability gives visitors the chance to see the city even when the weather is non-permitting. Children and adults both are offered multi-media audio tours that give off fascinating facts and history. This is an experience that any tourist or traveler will enjoy. Seeing the city of Chicago from such a unique angle will be something your group will never forget, and the beauty of the tilt will be inspiring.
Share this: