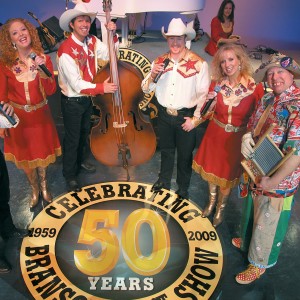 Groups of Show Me State wanderers sampling all the down-home sights and sounds of Branson, Missouri, will definitely want to make it out to catch the Baldknobbers Jamboree Show – “The Show That Started it All.” Over fifty years ago the four Mabe brothers – Jim, Lyle, Bill and Bob – also known as the Baldknobbers – began entertaining guests out on the beautiful Branson lakefront; their rollicking show was an immediate hit with the fishermen and tourists. Decades later, they continue to wow faithful fans and new audiences by delivering a wonderful blend of traditional country, today’s hottest #1 hits and hilarious comedy that keeps them coming back for more! Generations of talented Mabe Family members feed the legacy and keep the beloved Branson Baldknobbers tradition running strong, bringing a dynamic, completely new show to the stage each year; it’s their “Songs You Know By Heart” and hilarious comedy that have made this show so popular from generation to generation. Today, the 2nd & 3rd generations of the Mabe family are joined by a dynamic cast of singers, musicians, comedians, and entertainers, and they consistently deliver that Baldknobber brand of Ozark Mountain magic, performing your favorite Country Classics, hot, new Country Hits, and side-splitting comedy. Cool fact: In 2011, an assortment of original costumes, instruments and artifacts were donated to the permanent Arts and Culture collection on display at the Smithsonian’s National Museum of American History! Be sure to stop in at Country Restaurant right next door to the Theatre and Inn for a home style menu and old-fashioned buffet of delightful favorites based on authentic Ozark recipes; “ya’ll” might want to save a little room for their scrumptious homemade cobblers and pies!
Share this: