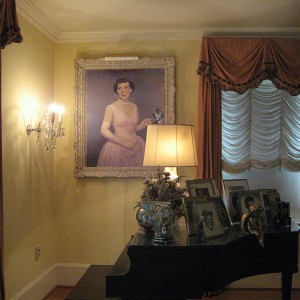 When your adult group plans a visit to Gettysburg, you may want to explore the Eisenhower National Historic Site which is the farm and home of President Dwight D. Eisenhower and his wife. The group can take a tour of the house and surrounding area. THE location has a beautiful landscape for you to view. The group can take the new Audio Tour of the home which gives you a glimpse into the lives of the Eisenhower family. Visitors can use their cell phone to call a number or log on to a website and listen to the tour free of charge. Cell phone minutes do apply if applicable. During the tour, you will stop at various sites and listen to stories about the Eisenhowers, their family, and features around their home. The group will encounter areas such as the orchard, the putting green, the show barn, the rose gardens, and the dog pens. Dwight D. Eisenhower traveled to Gettysburg in 1915. He was a cadet at the Military Academy. During World War I, his family came back to the area and Dwight was appointed to be the commander of Camp Colt. Eisenhower purchased the farm in 1950. The general took a trip to Europe where he was in command of the North Atlantic Treaty Organization after purchasing the farm. He ran for the presidency in 1952. During his first term as President, he and his wife renovated the farm because most of the original structure was not sound. The construction was completed in 1955 and the Eisenhowers stayed on the farm on weekends and holidays.
Share this: