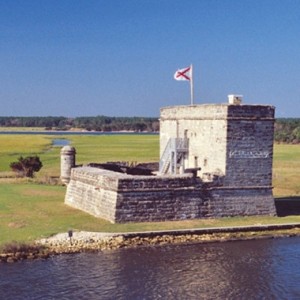 Groups on Sunshine State excursion exploring historic St. Augustine area landmarks and points of interest won’t want to miss this well-preserved part of the Florida National Park System, a somewhat small and primitive yet crucial monument commemorating the Spanish phase of Colonial American history. For centuries, Coastal Florida was a major field of conflict as European nations fought for control in the New World and tiny coquina-stone Fort Matanzas, a seven – man, five – cannon structure with a 1500 gallon fresh water cistern built into the rear of the gundeck fiercely guarded Matanzas Inlet, the “back door” to the “Oldest City” of St. Augustine. Although the Fort was originally built on just two acres of land, time, tides and the hand of man have contributed to the island’s growth to nearly 200 acres, today known as Rattlesnake Island. This fascinating landmark is accessible only by ferry and complimentary park service – guided character tours are offered on the hour, acquainting you with the pristine natural surroundings while bringing Fort Matanzas’ important history to life. Imagine yourself a soldier assigned to this fortified watchtower; close your eyes, and listen to what this very early part of our Nation’s history has to tell you.