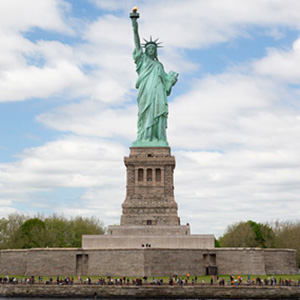 Probably the most recognizable attraction in the whole United States, the Statue of Liberty is located on 12-acre Liberty Island in the New York City harbor. This beautiful statue was a gift from the French. While she took nine years to construct in France, upon her arrival in America after she had been crated into 350 separate pieces she only took four months to assemble in her new home. She stands as a universal symbol of democracy and freedom, especially for immigrants as they approached the island. She actually served a term of 16 years as a lighthouse when she first arrived! You’ll learn even more about the history and symbolism on the Promenade tour which takes you behind the scenes of this enormous sculpture. The observatory tour lets you climb one step further to the observation balcony where you can see spectacular views of the New York City harbor. Lady Liberty’s full name is Liberty Enlightening the World. She is modeled after the Roman goddess Libertas, (except for her face which was created in the likeness of the sculptor’s own mother) the goddess of freedom worshipped by the freed slaves of the country. With broken chains enveloping her sandaled feet, Liberty is built to appear as though she is walking forward toward progress, not standing still. To put to bed the rumors, her crown is in fact open to tourists but only advanced reservations can guarantee entry! Standing between your tour group and the top of the crown is a whopping 393 steps. For those still building up wind power in the lungs, an elevator is available inside her 305 foot tall structure. The crown is comprised of seven points, each one represents a different sea and a different continent, all after one sacred goal: peace.