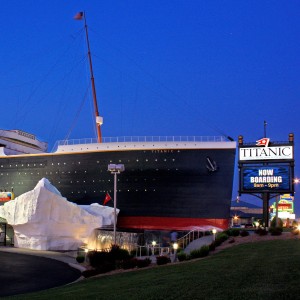 The wildly popular “Titanic Museum Attraction” in entertainment capitol Branson, Missouri is described as “the most lavish monument to the sea’s most famous disaster” as well as the “best storytelling museum in the world!” Staged on a beautiful, eerily-true half-scale replica of the legendary luxury liner Titanic built by John Joslyn, the man who led a 1987 expedition to her actual resting place, the Museum tenders groups out and about on Show Me State holiday a totally immersive, absolutely unforgettable two hour tour experience. Step through the iceberg, receive your boarding ticket (with the name of an actual passenger on it) and travel back in time to that darkest day as you imagine yourself anticipating a cruise to end all cruises, blissfully unaware of the deadly frozen obstacle lying just ahead in the frigid, black waters. Ascend the grand staircase, masterfully steer the ship, touch an “iceberg,” and practice transmitting a desperate SOS signal; hear the stories of famous passengers who sailed on Titanic’s fateful maiden voyage. The night of the unspeakable tragedy, the ill-fated vessel’s eight faithful musician’s played their hearts out as the ship and its passengers slipped beneath the icy surface of the Atlantic; they are wonderfully honored in a new and thrilling, world-exclusive tribute exhibit detailing their lives and legacies as true heroes. At the end of your amazing Titanic adventure, you and your travel partners learn whether “your” passengers survived the horrible disaster – or perished along with most of the guests – and the stoic Captain – in frigid 28 degree waters!
Share this: