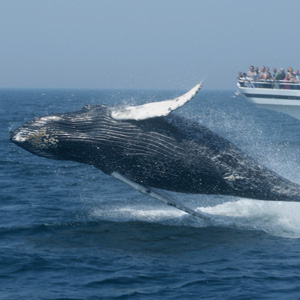 Whale watching is the ideal group travel attraction: it combines fun and learning to the extent that they are indistinguishable. The Dolphin Fleet Whale Watch operates out of the port of Provincetown at the easternmost end of Cape Cod, Massachusetts. At this location Provincetown is already 40 miles out to sea and only eight miles from Stellwagen Bank National Marine Sanctuary, an ancestral feeding ground for humpback whales and other large marine mammals as well as a host of other marine wildlife and birds. There is a lot to see and learn on an eco-excursion out to Stellwagen Bank. By the time the group is on the boat they are prepared to make the most of the presentation, which is given by the naturalist for every whale watching trip as the vessel makes its way out to sea. This presentation is much more general in content, pointing out historic sights, such as lighthouses and the sites of abandoned settlements in the Cape Cod National Seashore, which comprises more than three-quarters of Provincetown’s land mass. Provincetown is the only place in America to have three functioning lighthouses within its borders. The naturalist has a microphone at the ready during this part of the trip to draw groups’ attention to wildlife sightings as they appear, such as pelagic birds, which spend almost their entire life at sea and only come ashore to breed and nest. Sea turtles swimming in the current and seals hauled out on the desolate beaches are also valuable sightings. No whale watch is ever the same and groups soon realize they need to scan the shore, sky and sea to see what’s going to happen next. Of course the next big thing is a whale spout visible on the horizon. While the Dolphin crew and naturalists are constantly scanning the sea for the first sign of whales, sometimes it’s the passengers who get to say, “thar’ she blows!”. Whales are air-breathing mammals, like us, and must surface to exhale and inhale. Exhalations from their giant lungs are estimated to have the force of a 100 mph wind and are visible when their hot breath vaporizes in the cooler air at the water surface. They can easily reach a height of twenty or thirty feet. When whales are around the vessel the naturalist typically lets the groups experience their presence without much lecturing other than to name the individuals, identify their calves, and to point out characteristic behaviors such as bubble feeding and lunge feeding. The whale breaches are self-explanatory ~ when a 40-ton whale explodes out of the depths to reveal sometimes over half of their bodies in mid air, the groups are engaged and in tune with the whales. No one knows exactly why whales exhibit this breaching behavior but one guess is they do it out of sheer exuberance, something the kids can certainly relate to, especially on a whale watch.