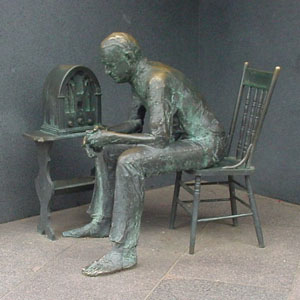 The FDR Memorial is located in Washington, D.C. The U.S. National Park service is the second location that contains this iconic history Franklin Roosevelt made a famous speech at this location in 1936. The first memorial consisted of a marble block stone that now stands at the National Archives Building, facing the U.S. Navy Memorial. The dedication took place on May 2nd, 1997. In August 1955, a decade after Roosevelt’s death, Congress established a commission to create a memorial of the 32nd U.S. president. Four years later, a location for the memorial was chosen. It was halfway between the Lincoln and Jefferson Memorials, along the Tidal Basin. Many design competitions were held over the years but it wasn’t until 1978 that a design was chosen. The commission decided Lawrence Halprin’s design was the best memorial design, a 7.5 acre memorial that represented both President Roosevelt and his era. Unlike the Lincoln and Jefferson Memorials, which are compact, covered, and focused on one statue of the presidents, the FDR memorial is vast, uncovered, and focused on several different aspects. Specifically, it focused on numerous statues, quotes, and waterfalls. Halprin’s design tells the story of the president and the country in chronological order. There are four rooms which represent the 12 years of FDR’s presidency. The memorial now stands as a reminder of some of America’s tougher times, including World War II and the Great Depression.