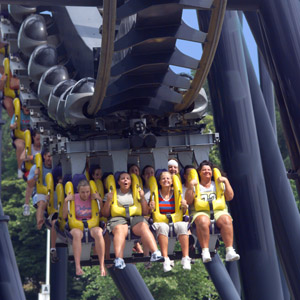 After the wild success of his original Six Flags park in Texas, founder Angus Wynne began his quest for the ideal location for a second park and ultimately settled on a parcel of land situated along the Chattahoochee River just west of the sunny Peach State city of Atlanta. In 1964, the new entertainment complex broke ground and in 1967, the 290-acre theme park opened – replete with a supporting cast of popular cartoon and super hero characters – and Six Flags became the first multi-gate theme park operator in the United States. Groups of die-hard adrenaline junkies and coasterheads on Atlanta excursion jonesing for the ultimate terror tear  to break up a “safe” itinerary of feasting, shopping and sightseeing need look no further than Six Flags Over Georgia for an outrageous roundup of the most heart-pounding, hair-whipping, stomach-dumping rides-some of the fastest, tallest and wildest in the country. A complete range of tamer rides and quintessential “family” entertainment caters to those less intrepid types tagging along to keep them out of your hair while you feed your need for speed and crush your crave for crazy; a smorgasbord of fun, classic choices- All-American fare, healthy snacks, delectable sweets and a “world” of culinary delights – ensure foodies their perfect fuel. Word to the adventurous grasshopper: ride first, eat later! Don’t forget to grab a souvenir or two before you call it a day; you’ll find an awesome assortment of merchandise, memorabilia and fun ride photo ops for a perfectly personalized commemoration of your group’s Six Flags Over Georgia adventure.
Share this: