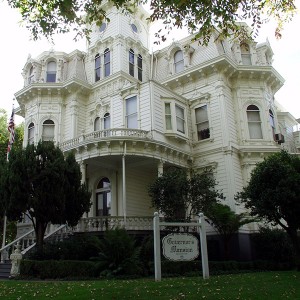 Groups en route to the Golden State will be delighted to find a stop at the California Executive Mansion – commonly referred to as “the Governor’s Mansion” – on their Sacramento itinerary. Guests are warmly welcomed by a competent and friendly staff, and escorted on a delightful promenade through history from the moment they step onto the lovingly manicured grounds that for 64 years courted the daily activities of thirteen of California’s First Families. The beautiful executive mansion on the corner of 16th and H Streets in downtown Sacramento, originally built in 1877 for local hardware merchant Albert Gallatin and his wife Clemenza, was purchased for $32,500.00 from Joseph and Louisa Steffens by the State of California in 1903. Resplendent in the manner of the day with such finery as Italian marble fireplaces, ornate, gilt framed mirrors from France and exquisitely handcrafted hinges and doorknobs, the 30-room Second Empire-Italianate Victorian mansion was suitably impressive, though somewhat dated, by then; it was, however, conveniently located and quite comfortable. Governor George Pardee and his family were the first official residents of the “new” Governor’s Mansion; today, select furnishings remain, left behind by important occupants over the decades, including the Pardee’s regal 1902 Steinway piano, authentic Persian rugs acquired by Mrs. Earl Warren and plush velvet sofas and chairs belonging to Governor Hiram Johnson, all contributing to the landmark home’s grand, if eclectic ambiance. The stately old residence has undergone a series of renovations over the years, and recently received a long-overdue , “full face lift”; it remains unoccupied since the Reagans, the last first family to call the Mansion home, moved on, and is now primarily employed as a venue for state and public events.