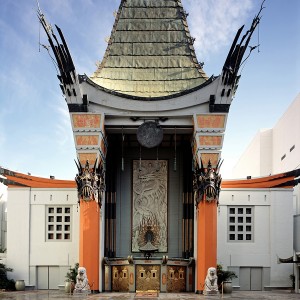 Grauman Theater’s awe-inspiring, palatial presence and flamboyant history has been a cornerstone of the Hollywood experience since its grand opening in May of 1927-the most spectacular new theater debut in motion picture history! The most sought-after venue in all of Tinseltown for studio premieres, the magnificent Chinese is also a beloved local and star tourist attraction: declared a cultural-historic landmark in 1968, more than four million visitors per year flock to the ornate movie palace’s events, hoping to catch a glimpse of arriving stars flanked by the ubiquitous entourage of big-gun glitterati gliding up the red carpet and into the theater. The magnificent coral-columned, bronze-roofed, jade dragon-and-Heaven dog-guarded theater is adorned with all manner of lavish and authentic Chinese artifacts and statuary. The elaborate forecourt of the stars, surrounded by 40 foot walls and copper-topped turrets, a fabulous tribute to the Golden Age of Hollywood and icons of today, and days gone by-replete with glamorous ten foot fountains and intricate traditional Chinese artistry bordering concrete blocks of celebrity handprints, footprints and signatures welcomes star-struck guests of the opulent theater inside the wonderful world of Hollywood romance, fantasy and magic. The Chinese is not only a grand stage for glamorous affairs but an actual working theater with regular shows scheduled daily, a fabulous old-school concession with the best popcorn in town and an interior rivalling the outside in grandeur. You know, it’s been said: “To visit Los Angeles and not see the Chinese is like visiting China and not seeing the Great Wall;” be sure and pencil in a stop at this venerable La La Landmark-grap a few photos and treat yourself to some decadent silver-screen time!