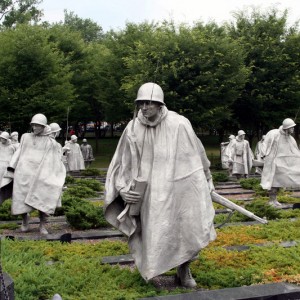 The Korean War Veterans Memorial is one of the most fascinating and sensitive of the memorials in Washington, D.C. and when visited at dusk, the Memorial becomes even more realistic. This awe-inspiring Memorial was built to honor the courageous soldiers who served in the Korean War, while paying particular attention to those who were killed, or missing in action, or those who were taken as prisoners of war. In it, 19 American soldiers are brilliantly depicted seven feet tall and making their way through Korea’s harsh terrain. These detailed statues are made of stainless steel, wear gear and clothing authentic to the Korean War-era, and appear to be walking into the wind. Your tour group will be astonished by the amount of realism the detail in this memorial brings to such a saddening topic. The Mural Wall is comprised of 41 panels and measures 164 feet long. It was ingenuously designed from 15,000 photographs of various different aspects of the War. The final product displays 2,400 etched images from all the armed forces. If your educational group tour chooses to visit the Pool of Remembrance, you will get the enchanting view of the peninsula-like area representative of the Korean peninsula and see lists of the statistics of the War. Lined in black granite and surrounded by shade trees, a plaque on the wall reads the famous words “Freedom is not free”. Visiting the Korean War Veterans Memorial will be one of the most inspiring and motivating things you do while visiting Washington, D.C.