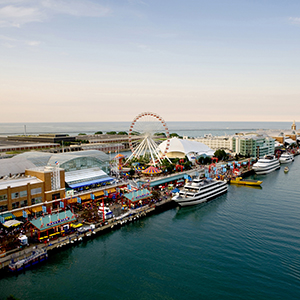 The Navy Pier is the place to go if you are a tourist in Chicago! Fireworks are displayed throughout the year. There are tons of attractions available for the public to see, including Circus Zircus, a circus that is run by kids! If your tour group wants an educational splash to their fun adventures, visit the Chicago Children’s Museum, where kids ten and under and their families get the chance to climb aboard a ship, hide in a treehouse, invent different machines, drive a fire truck, and make wonderful artistic masterpieces to take home! There are loads of fun activities for everyone to enjoy! You will love the amazing view of Lake Michigan. The construction of the Navy Pier was started May 1914 and in 1916 it became the largest pier in the world at 292 feet wide and 3000 feet long. It was used for all sorts of things, from attracting visitors and ships to being used by the military during the First World War. The introduction of cars meant the decline of the pier. People wanted to see movies or drive their brand new car instead. In 1927, it was named the Navy Pier in honor of the veterans of World War I. In 1976, the pier was restored and one year later declared as Chicago landmark! The 150 million dollars spent on the reconstruction in 1994 was well worth it, because once the renovation was completed the pier began seeing 8 million visitors each year! The Navy Pier is a place of large history with bundles of fun for everyone!
Share this: