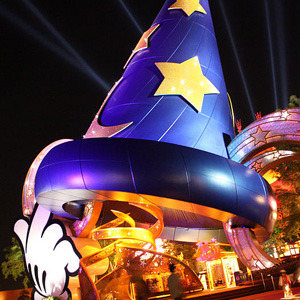 Your group is heading out to the Sunshine State, hearts set on seeing all of Disney World; once there, you’ll be beyond ecstatic to discover big-screen movie magic come roaring to life at Disney’s Hollywood Studios. Dive right into the action with more than a dozen world-class attractions based on your favorite blockbuster hits and thrill to entertainment that puts you and your travel partners center stage amidst all the glitz, glamour and excitement of Hollywood’s Golden Age. Furiously abuzz with all the spine-tingling energy of a bustling movie set, this park features eight magnificent sections: Hollywood Boulevard, Echo Lake, Sunset Boulevard, Streets of America, Commissary Lane, Pixar Place, Mickey Avenue and Animation Courtyard areas. Go behind the scenes on an open-air adventure through Catastrophe Canyon or take part in a realistic Harbor Attack demonstration to experience firsthand what it’s like to work with special effects while filming an unforgettable air/sea battle! Step into the Twilight Zone – and a terrifyingly haunted elevator – for the ride of your life, stroll like a boss right out onto a soundstage designed to invoke 1930s-era Hollywood and hop a tram for a fascinating tour of some of Tinseltown’s most notorious film scenes – be a part of such classic greats as Alien, Raiders of the Lost Ark, The Wizard of Oz and Fantasia. When you’re ready to break for lunch, the sky’s the limit; if you’re hungry for it, you’re certain to find a “Hollywood-fabulous” version of whatever you’re craving amongst nearly two dozen Hollywood Studios dining options!