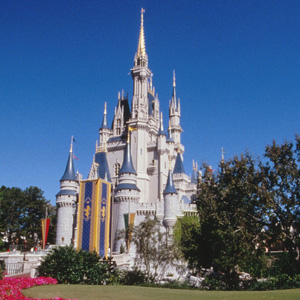 Groups heading out on an Orlando sun and fun run will discover fairytale dreams do, indeed, come true for children of all ages at Disney World’s magnificent Magic Kingdom! Delight in all the legendary wonder of classic Disney attractions, thrill to spectacular fireworks shows, enjoy lively musical parades and, of course – hang out with the entire cast of Disney Characters as you wander through six enchanting themed “lands.” Watch your every Disney fantasy take shape as you explore Adventureland, Frontierland, Main Street, U.S.A areas and more; hurtle through the cosmos to the edge of the galaxy and back, become a swashbuckling pirate and witness Cinderella Castle transformed into a pixie-dusted piece of living art! Mosey on up to a rustic log cabin and wrap your hands around a replica .54-caliber Hawkins buffalo rifle; peer out onto a classic Southwestern landscape and take aim at nearly 100 familiar targets, including cemetery, a bank, a hotel, a covered wagon and a mine! Sneak down a meanderin’ alleyway within a Spanish fortress and stow aboard a small barge for a spellbinding high-seas adventure; escape through a shadowy grotto past the ghostly catacombs of unfortunate pirates and swoop down a small rushing waterfall – your passageway to the Golden Age of Piracy and more high-seas excitement than you can throw a parrot at! See your favorite Disney heroes, princesses and villains projected onto a million gallons of dancing water; conquer epic Space Mountain, cruise around Tom Sawyer Island on the steamship Liberty Belle, board a Walt Disney Railroad train for the tour of a lifetime and visit the Hall of Presidents – and the creepy Haunted Mansion! (Pssst – don’t forget to pick up your set of magically pulsating Glow with the Show Ears!)