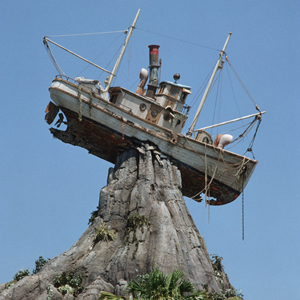 Groups on Sunshine State holiday won’t want to miss the chance to spend a day at this fabulous water park wonderland located at the world famous Walt Disney World Resort complex! The sister park to Blizzard Beach, Typhoon Lagoon is the most visited water park on the planet and home to one of the world’s largest outdoor wave pools. Legend has it a ferocious typhoon wrought havoc on the formerly pristine island paradise, leaving boats, fishing gear, and surf boards strewn randomly about in its wake. The park’s centerpiece, FV Miss Tilly, remains impaled upon Mount Mayday – which erupts a 50-foot geyser of water every half – hour upon the sounding of the watch on the shrimp boat, lost during the storm. Dozens of attractions treat Lagoon guests of all ages to a fantastically refreshing Island splash-fest; snorkel with sharks, stingrays and colorful tropical fish in Shark Reef, tumble down rushing rapids, soak up some sun on the white, sandy beach of Hideaway Cay and glide down Castaway Creek on a relaxing raft ride. Launch into fast-paced, wet and wild fun on Humunga Cowabunga, the Storm Slides, and Keelhaul Falls; frolic in the gentle swells of the wave pool – even learn to surf- and explore the cave and waterfalls of Forgotten Grotto and Overlook Pass. Plenty of kiddie attractions and play areas tender the littlest adventurers in your group BIG fun, and an exciting array of Island-style snack shacks serving up all the yummy classics promise you won’t run out of fuel on your grand Typhoon Lagoon adventure!