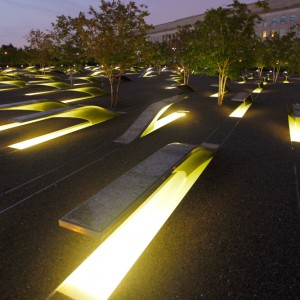 The Pentagon Memorial is located in Washington, D.C. It commemorates the 184 lives lost in the Pentagon and on American Flight 77 during the terrorist attacks on September 11, 2001. This Memorial encompasses 1.93 acres and sits on the western side of the Pentagon. Each victim has an individual unit bench engraved with their name, hovering over a pool of water that glows with light at night. The units are organized by a timeline based on the ages of the victims and are placed along age lines parallel with the trajectory of Flight 77, each marked with a birth year, ranging from 1998 to 1930. The Pentagon Memorial was dedicated and officially opened to the public on September 11, 2008. The construction of the location was funded by private donations. Centex Lee LLC built the Memorial and it was designed by Julie Beckman and Keith Kaseman. It was commissioned by the Washington Headquarters Service in 2003. If the group would like an audio tour, they are available through dialing a number and listening to a 24-minute guide. You will be shown to different points of interest throughout the memorial.
Share this: