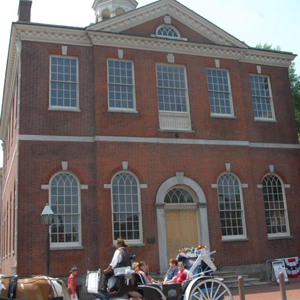 Congress Hall is located near Independence Hall. The building was constructed from 1787-1789. It was a County Court Hand was also the meeting place for the senate and the House of Representatives. The building has been restored as much as possible. There were special events that occurred at Congress Hall. There are ranger led programs that are available for your group to consider. The building is a 2 story Georgian structure that characterized the roles of Congress. On the second floor, you will find that the carpet has the American eagle encircled with the 13 original States. The House of Representatives met on the top floor. There are also larger-than-life images of Marie Antwanette and Louis XVI which were gifts from the French Government. John Adams and George Washington were enaugurated in this building. The first political parties were created at the location as well. Come see this fascinating landmark when planning your trip!
Share this: