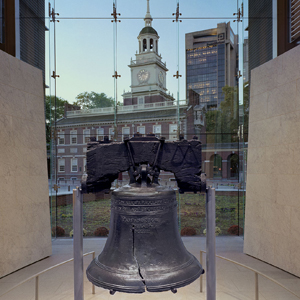 The Liberty Bell Center is located close to Independence Hall in Philadelphia, Pennsylvania. The location houses the iconic historic landmark known as the Liberty Bell. The group can listen to presentations about the history of the bell. You can observe the bell through glass with Independence Hall in the background. The experience will be unforgettable! The group will have the opportunity to view larger-than-life graphical images and historical documents where you will discover the facts and myths about the bell. X-rays give visitors a glimpse of the inside of the cracked bell and her inner workings. There is also a history film available shown in quiet alcoves of the center. The film traces how abolitionists, suffragists and other groups adopted the bell as a symbol of freedom. Other exhibits show how the image of the bell was used on everything from ice-cream molds to wind chimes. The Bell now known as the Liberty Bell was cast in the Whitechapel Foundry in the East End of London and was sent to the current location in 1753. It was an impressive looking object and had a pound clapper. The inscription was part of a biblical verse from Leviticus, “Proclaim Liberty throughout all the land unto all the inhabitants thereof.”