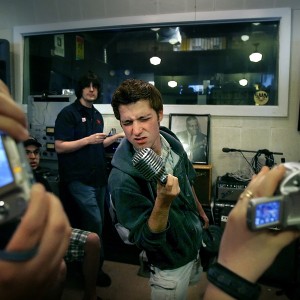 “If music was a religion, then Memphis would be Jerusalem, and Sun Studio its most Holy Shrine.” Visitors to iconic Beale Street must NOT miss an opportunity to stop into this landmark historic attraction, springboard for some of the most important careers in the history of music and comfort food for established modern talent looking to tradition for occasional inspiration. Rock pioneer Sam Phillips opened the doors to his childhood dream and brand new Blues City studio with the slogan, “we record anything, anywhere, anytime” in an effort to drum up business and generate some fast cash. Jackie Brenston and his Delta Cats’ “Rocket 88″ was recorded there in 1951 with Ike Turner on keyboards – reputedly the first single ever – earning the studio its golden status as the “birthplace” of Rock ‘n’ Roll. Fast forward through a series of ups, downs, changes big and small, sweet successes and the usual setbacks to the day 18-and-a-half year old Elvis Aaron Presley walked through the doors and recorded his first number, EVER. The rest, as they say, is history. Phillip’s studio ultimately garnered the reputation as the place that nurtured fledgling talent and encouraged it to expand with bigger labels, and heavy hitters that cut their teeth at Sun would move back through those doors, time and again – legends like Johnny Cash, Carl Perkins, B.B. King, Jerry Lee Lewis, Roy Orbison – and of course, Elvis Presley, the undisputed King of Rock ‘n’ Roll . It’s been said Sun Studio oozes grit, blue collar resolve, and unadulterated Americana. The table where The King signed his very first contract sits right at the studio entrance. Tours happen on the half hour, and treat guests to an unforgettable hit of pure nostalgia; if you’re waiting your turn, check out the killer memorabilia on display, browse souvenirs, or pop a squat at the counter, order up a malt and imagine Elvis next to you. It’s not that hard to do.