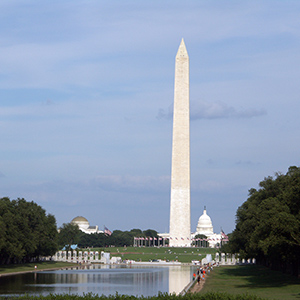 Most people recognize this tall, sleek structure as a symbol of our nation’s capital. This is fitting considering what the monument actually does represent. Standing taller than any structure in Washington, D.C., and according to current zoning laws likely to be the tallest in the city ever, the Washington Monument is the centerpiece for the world-famous National Mall. Here you’ll find almost all of the presidential and war memorials so popular for Washington, D.C., group tours. Much thought always goes into the design of any monument, and Washington’s was no different. This unique shape with its imposing height was chosen to symbolize George Washington’s prominence in our history. He is often called the Father of our country, and designers wanted his memorial to be equally distinguishing among the capital’s many monuments. That intent was certainly captured in this dramatic, over 555-foot, obelisk-shaped structure, recognizable around the world. And this should be true as it is the tallest stone structure on the planet. On clear days it has a visibility of 30 to 40 miles. Around the base of the Washington monument stand 50 flags. Inside, visitors find a statue depicting George Washington as well as information and artifacts about him. Then from the observation deck within, visitors can view the amazing visibility for themselves and get a unique view of Washington, D.C.’s, other prominent buildings, including those on the National Mall. Behind the Washington Monument, the beautiful, rectangular Reflecting Pool gives a unique view of the monument itself. This pool was specially designed to minimize ripples from the wind, allowing for a crystal-sharp reflection of this amazing structure.