With names like Bulls Ridge, Falls Village, St. Johns Ledges and Pine Swamp how can a hike through the Appalachian Mountains be anything less than natural? As always, the trail is maintained with the utmost care to preserve its beauty and natural habitat and ecosystem. Many of the hikes are 4 – 10 miles, which for most hikers can be done in one day. Be sure to slow down and enjoy flora and fauna. So many incredible wildflowers bloom in the deep darkness of the forest and few take the opportunity to search it out. The Wood Anemone can be seen in abundance throughout much of the trail. These naturalized plants can’t be purchased anywhere so enjoy them on the hike. What a treasure.

All who travel the wilderness of the A.T are encouraged to clean up after any who violate the code of the trail; keep it natural and keep it wilderness. Trash left behind should be disposed of. When nature calls hikers should step off the trail and bury all waste so the essence of the A.T. is never disturbed or destroyed. When planning a hike across the A.T. check out the many helpful websites before traveling to educate self prior to the trip. Volunteer efforts are generally coordinated by the Appalachian Trail Conservancy (ATC) organization. Feel free to contact them for information when planning your trip.

There are 300 miles of beautiful wooded nature in the North Carolina Appalachian Trails. The trails of the Deep South offer sights and sounds that won’t be found elsewhere. Bicknell’s Thrush is a rare bird that is found along the trail. Even though visitors may not see the elusive bird, they will certainly hear its flute like call. Other animals that groups may see along on the way are moose, deer, bear, feral ponies, beavers and porcupines. Bears are becoming quite a nuisance along much of the Appalachian Trail. Check websites specific to each state to see what precautions should be taken to avoid a run-in with potentially dangerous wildlife. The trail’s highest altitude is on Clingman’s Dome, the 6,643 foot mountain in theGreat Smoky Mountains National Park. The views are spectacular. In the upper elevations the trees are spruce, firs and evergreens with short, dark needles. Since conifers dominate the highest mountains in the southern Appalachians, the forests are similar to those found in Maine. Clearing and maintaining the trail is a service project that is appreciated by all who hike and love nature.

There are activities planned almost every day or weekly by groups and organizations who love the Appalachian Trail and work to keep it as natural and seemingly untouched as possible. The GATC or Georgia Appalachian Trail Club has many opportunities for individuals and groups to be involved in cleaning, clearing and restoring the trail. The GATC works hand in hand with the conservation department and preservationists so future generations can enjoy the same hiking that we do now. Your group can enjoy a hike up Lookout Mountain (Skuyuka Springs) and on to the top of Sunset Rock for a great view of the Tennessee River. Take a 4.5 mile hike in a nature preserve and end in Gwinnet for lunch or shopping at a local mall. For those who want to volunteer, plan a day on R-Ranch Trail doing trail maintenance in the morning, then join with the other workers for a picnic lunch. Cool off with a seven-mile float. Take a swim from a rock in the middle of the river, have lunch on an oh-so-private sandy beach, and paddle your kayak along with your guide. Georgia has some of the best hiking and scenic views on the Appalachian Trail.

Unique as the famous country singer’s name, Dolly Parton, Dollywood theme park is a one-of-a-kind Smoky Mountain Family Adventure! These beautiful 125 acres are nestled in the lush foothills of the Great Smoky Mountains in Pigeon Forge, Tennessee, near Gatlinburg, Dollywood and create one of the most popular group vacation destinations in Tennessee. Enjoy thrill-seeking Dollywood amusement park rides including the award-winning wooden roller coaster The Thunderhead™-the wildest ride in the woods. This family and group vacation fun at Dollywood features several family attractions. Dollywood’s live entertainment showcases the best in the country with bluegrass, mountain and gospel music and more than a dozen stage shows. Master craftsmen demonstrate centuries-old crafts, including blacksmithing, glass blowing and wood carving that are a lot of fun to watch.  They will leave you amazed at how they skillfully create a work of art. 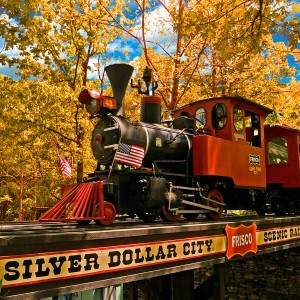 Groups on Show Me State getaway will want to pencil in a dedicated play day at this world-famous Branson theme park, painstakingly modeled after an 1800s Missouri town. Silver Dollar City has been serving up its special brand of fabulous home-style entertainment for the whole family since 1960; today, with more than thirty thrilling rides and attractions, dozens of quaint shops and scores of top-notch artisans hawking traditional crafts and goods, you’re sure to find something to tickle your fancy at every turn! Whether you take in one of 40 live, daily shows , enjoy your pick of more than 100 intriguing crafting demonstrations, shop to your heart’s content or find your thrill on one of the park’s rootin’, tootin’ roller coasters, everyone in your group is sure to have the time of their lives at Silver Dollar City! Younguns will enjoy Half Dollar Holler, and Grand Exposition features ten family-friendly traditional rides; be sure to explore landmark Marvel Cave! For a fully immersive experience, plan to stay in a rustic Wilderness cabin, your home away from home in the Silver Dollar City campground, where “adventure comes to rest.” Get your boots off and your cool on at Whitewater, Branson’s world-class water park featuring two million gallons of wet and wild attractions sure to please even the pickiest of waterdogs; Red, White and Bloom fireworks ensure the perfect ending to a spectacular splash-fest. Popular festivals & special events like Bluegrass and BBQ, Star Spangled Summer and the National Harvest and Cowboy Festival continue to draw and delight guests year-round. When all that playin’ and prospectin’ has you hungry as a skinny possum in a loaded larder, plenty of mouth-watering Show-Me-State favorites promise to quiet that tummy grumble, Silver Dollar City-style.

Commonly known as The Met, The Metropolitan Museum of Art was founded in 1870 by Americans after an inspiring trip to Paris. It was decided that the United States needed a national institution and artistic landmark comparable to the Louvre and The Met was established to furnish artistic understanding, inspire, and encourage the development of creativity.

The Met has been located in the same grand, neoclassical structure on 5th Avenue since 1880 and has added on new structures such as the Cloisters, a religious and traditional style collection of galleries. More than just a museum, The Met and its beautiful facade have been used as a filming location for several movies including The Thomas Crown Affair, Maid in Manhattan, When Harry Met Sally, and Hitch starring Will Smith.

The Met is one of the largest museums in the world with two million square feet of galleries and exhibits. Permanent collections include works by Rembrandt, Albrecht Durer, Georgia O’Keeffe, El Greco, Renoir, and Winslow Homer. Five paintings by Vincent Van Gogh including his beautiful piece, Cypresses, three sketches by Leonardo da Vinci, and five paintings by Pablo Picasso are also on display for visitors.

The Met is open daily with guided and/or audio tours available as well as suggested itineraries so that you are able to view as much as possible during your visit.

This amazing project gives young performers the chance to explore their creativity through the many incredible aspects of Broadway. Your class can focus on song, dance, drama – even the technical or business side of Broadway, depending on your interests. And it’s led by a Broadway professional working right in the midst of the magic.

Mount Desert Island combines the mountains with the ocean and has been proclaimed by many as the most beautiful place they have ever seen. With so many hiking trails and shorelines, your group should have a picnic on the large rocks facing the ocean and watch the incredible sprays when the tide comes in hitting the rocks. It is beautiful. Watch out for the sea gulls as they will happily snap up your food. Take a drive around the Loop Road and stop in the parking area for Otter Point. At Otter Point you will see the tide coming in and the surf crashing against the huge boulders. The sight is awe-inspiring. If you are courageous you can climb down close to the water to examine the tide pools. A visit to Bar Harbor for lobster is in order. If your visit is in the summer, stop at the Village Green bandstand to enjoy a concert or go to the 1932 Criterion Movie Theater for a show. At low tide your group can walk or dive across the bay to Bar Island, be sure to check the tide schedule so you don’t get stranded. Acadia National Park offers experiences in sight and sound that can’t be found any where else. Enjoy your visit.

When leaving the Visitors Center in Acadia National Park, Cadillac Mountain will be the first site you come to. It is not only the highest mountain in the park, at 1530 feet above sea level, but also on the Atlantic Seaboard, and amazingly you can drive up or hike to the summit. The trek is a beautiful three-mile winding road with incredible overlooks all along the way. As you ascend the mountain, the evergreens of the forest thins out and at the summit, the view of Bar Harbor and Frenchman’s Bay is breathtaking. If there is a bit of fog you can watch the fog flow over the city and the bay. Don’t reschedule your trip to the mountain if it is a foggy day as it can actually enhance the experience. Be sure to take a camera so you can take pictures in all directions as there is a 3/10 mile paved summit loop trail, which will allow you to see in all directions. If you are truly dedicated you can arrive early in the morning to see the sunrise. It’s a fascinating experience as the view from Cadillac Mountain is the first place on the east coast you can see the sunrise. To beat the crowds, an early arrival is best. By 11am or 12pm the crowds have gathered. On a crystal clear day you may be able to see Mount Kathadin which is about 100 miles away. You’ll also want to visit the gift shop on the summit for souvenirs of your hike up Cadillac Mountain.

Be one of the few visitors each year who get to experience Yellowstone’s mud pots and hot springs with an early morning departure from your Inn. Along the hike you’ll see theGeyser Basins, which put Yellowstone National Park on the map. Get up close and personal with some of the more than 10,000 thermals all over Yellowstone. Of course there will be plenty of wildlife running around as well. You’ll not only see the popular geysers but the hidden ones that your naturalist guide knows of. Finish off the adventure with a scenic wildlife drive to your post-safari lodge where you can relax and reminisce on the past few days.